WHAT IS A CHARGING DYNAMO (ALTERNATOR)?

The Task of the Charger;

It feeds the electrical receiver while the engine is running.

Recharges the battery while the engine is running.

Why the Charger (Charger) Fail?

Parts in the Alternator such as bearing and coal have a certain lifetime. Hot, dusty and oily operating conditions reduce the life of the bearing.

There are two important causes of bearing failures. The first is the tension of the alternator's belt and the use of electrical devices that force its capacity.

What are the Charger Failure Symptoms?

Although the electrically induced alternator failure is not very visible, it can be noticed by the signals given by the vehicle. 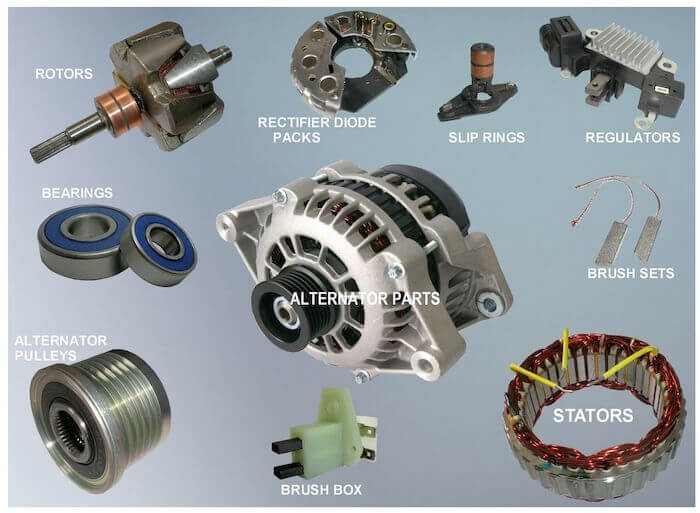 Chargers operate in the 13 or 14.5 volt range. In situations that require excessive power, such as turning on the headlights, activating the wipers, radio, heated seats or defroster in the window, the alternator operates with a high capacity voltage. If the voltage does not meet the needs of the system, it will go beyond the upper or lower limit and this change will cause the warning light to turn on.

This effect is seen in the electronic system when the alternator, which provides the electricity need of the vehicle, begins to lose electricity.

Dim or too bright headlight and indicator lights

This stated situation is decomposed as signals from our senses. These signals are not as obvious as incoming warnings, but indicate to the driver that something is wrong.

The alternator transmits electricity through large cables and small wires. Problems in the connection of wires or cables can reduce or stop the passage of electricity completely. In some cases, more energy consumption is required to overcome the resistance of the alternator, however, it may appear as bright light.

How is the alternator tested?

Alternators (Lichtmaschine, Alternator) are auxiliary units that play an important role in motor vehicles. It functions in charging the battery and generating the electrical energy required by the car. In modern charging dynamos, the magnetic flux created by the rotor causes induction in the 3-phase winding in the stator and 3-phase alternating current (AC) electrical energy is produced. Thanks to the rectifiers, this 3-phase electrical energy is converted to direct current (DC) and transferred to the vehicle's electrical system. The stator consists of thick and solid copper wires and is durable because of its immobility. For this reason, the parts that can malfunction in the alternator are as follows: Pulley bearing (front)

Good workmanship and the best quality parts should be used in the repair of the alternator, which is considered to be the liver of the vehicles, so to speak. For this reason, it is necessary to use quality and technological test equipment in the alternator repair process.

Nitro Bilişim is proud to offer our valued customers MSG devices, which are famous for their quality worldwide, with the principle of bringing the best quality at the cheapest price. Using the latest technology with MSG alternator and starter motor testers, you can perform the starter motor, alternator test without the need to install it on the vehicle.